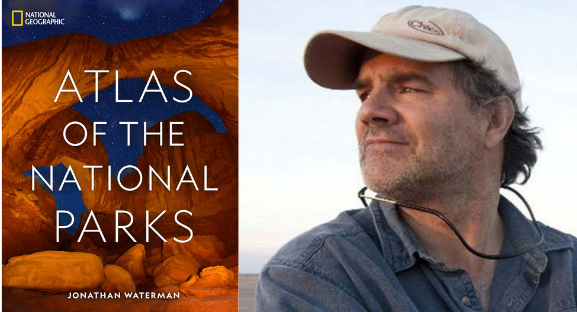 Join us for an evening with Jon Waterman as he discusses his latest book, National Geographic Atlas of the National Parks (2019). About the Author: Jon Waterman

Join us for an evening with Jon Waterman as he discusses his latest book, National Geographic Atlas of the National Parks (2019).

Jon Waterman started shooting photographs on his expeditions three decades ago, but also found his calling and is principally known as a writer. He has starred in, filmed, and written films for television, including “The Logan Challenge” (PBS, 1991), “Surviving Denali” (ESPN, 1994), “Odyssey Among the Inuit” (OLN, 2000), ANWR Trek (PBS 2007), and “Chasing Water” (Pete McBride films, 2011).

With more than 200 maps — both historical and contemporary — informative graphics and inspiring images, Atlas of the National Parks, by Jon Waterman (National Geographic; ISBN: 978-1-4262-2057-9; US $65/CAN $86; 432 pages), showcases the entirety of America’s spectacular park system for the very first time.

This seven-pound, best-selling tome tells the unique stories of America’s 61 beloved national parks and takes readers on an epic journey through the extraordinary and unique features that distinguish each. Organized by region, each insightful chapter provides aspiring travelers with an up-close look at what makes each park special via striking imagery and state-of-the-art graphics reflecting its magnificent landmarks, representative wildlife, climate, culture, geology, archaeology, recreational offerings and more. Each park entry includes at least one brand-new map, created by National Geographic in collaboration with the National Park Service.

This event is free and open to all.