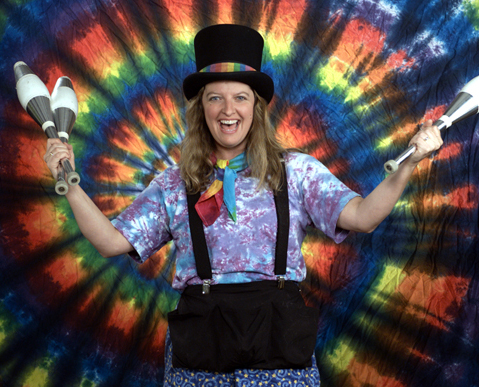 Ann Lincoln is coming to Gunnison Library on Thursday August 10 at 10am. Her show contains comedy, expert juggling & circus skills, magic involving birds, bunnies & audience members, and can include Ann juggling two bowling balls while eating an apple!
Ann began honing her craft in 1982 when she first taught herself to juggle with lemons and limes. She auditioned for Scarborough Faire (a Texas Renaissance festival) and received a standing ovation and “Best Character” Award for her performance as King Henry’s court jester. She had found her calling and has now been a full-time professional entertainer for over 25 years; often performing as many as five shows a day!
Ann Lincoln’s goals as an entertainer are to be memorable, genuine, dynamic and unique. Her role models include Ellen DeGeneres, Lucille Ball, Carol Burnett, David Copperfield and P.T. Barnum.
Ann has performed all over the country and regularly travels across her home state of Colorado, performing her original shows several times a day. Her history of local Denver-area performances includes the People’s Fair, A Taste of Colorado, Aurora Kid’s Spree, Heritage Square, and three season’s at Elitch Gardens Amusement Park. In addition she has done literally thousands of shows at libraries, schools, daycares, company and private parties.
Television and film credits include ABC, PBS, the Disney Channel, Animal Planet, 9 News, Colorado & Company, Extreme Home Makeover and the comedic lead in the movie spoof “Jayne’s World”.
While ever masterful on stage, she is not afraid to let her audience know who she is as a person. Ann’s unique act engages all of the senses. The audience smells the fire being eaten, feels the weight of bowling balls being juggled, and hears the coo of her magical dove. They also talk about the show they’ve just seen for weeks to come. This is a free event at the Gunnison Library located on 307 North Wisconsin.