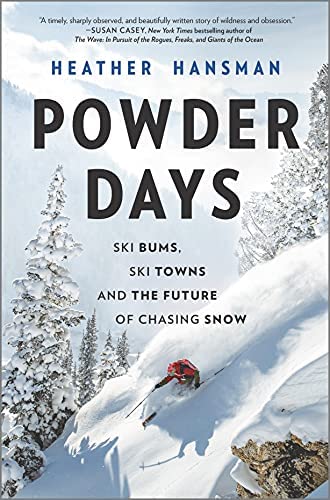 Join us for a presentation via webcast with outdoor journalist, Heather Hansman. She will be discussing her new book, “Powder Days: Ski Bums, Ski Towns and the Future of

Join us for a presentation via webcast with outdoor journalist, Heather Hansman. She will be discussing her new book, “Powder Days: Ski Bums, Ski Towns and the Future of Chasing Snow.” Published Nov. 9, 2021. Copies will be available to read in advance of the event and copies will be for sale at Townie Books.

Heather is a freelance writer and editor. She writes about a range of things, from butchers to birth control, but, to generalize, most of what she covers happens outside. She likes the intersection of science, adventure, and culture. She is the environmental columnist for Outside online, and she writes for places like The Guardian, Sierra, and The New York Times.

She has been recognized for both her writing and her social (media) skills. Her essay “Lighthouse for Sale” was a notable in the “2015 Best American Essays” book, she won the 2010 Thompson Award for Western Writing for her story about declining livestock prices, “The Cost of Sheep,” and the “Ski Town Throwdown,” a Facebook campaign she ran at Powder, won a 2013 Maggie for best use of social media.

She lives in Seattle but travels frequently for her many outdoor writing assignments.

An electrifying adventure into the rich history of skiing and the modern heart of ski-bum culture, from one of America’s most preeminent ski journalists

The story of skiing is, in many ways, the story of America itself. Blossoming from the Tenth Mountain Division in World War II, the sport took hold across the country, driven by adventurers seeking the rush of freedom that only cold mountain air could provide. As skiing gained in popularity, mom-and-pop backcountry hills gave way to groomed trails and eventually the mega-resorts of today. Along the way, the pioneers and diehards–the ski bums–remained the beating heart of the scene.

Veteran ski journalist and former ski bum Heather Hansman takes readers on an exhilarating journey into the hidden history of American skiing, offering a glimpse into an underexplored subculture from the perspective of a true insider. Hopping from Vermont to Colorado, Montana to West Virginia, Hansman profiles the people who have built their lives around a cold-weather obsession. Along the way she reckons with skiing’s problematic elements and investigates how the sport is evolving in the face of the existential threat of climate change.

Riveting, action-packed and beautifully written, Powder Days is a love letter to a high-stakes sport and the definitive tome for ski lovers everywhere.