Beneath Blue Mesa with David Primus 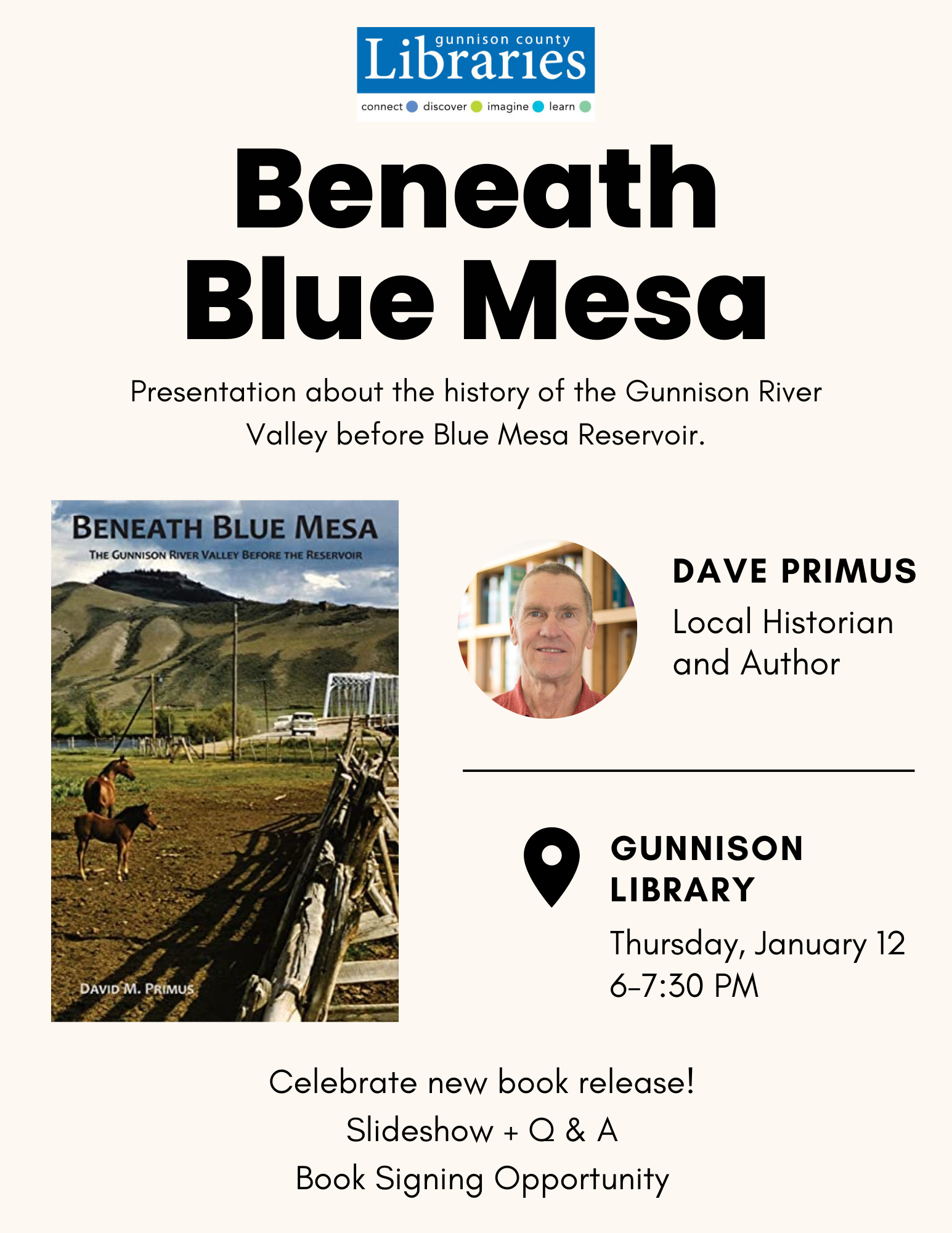 On Thursday, January 12 at 6 pm at the Gunnison Library, David Primus will present a slide show of the history of the Gunnison River Valley before Blue Mesa Reservoir

On Thursday, January 12 at 6 pm at the Gunnison Library, David Primus will present a slide show of the history of the Gunnison River Valley before Blue Mesa Reservoir was completed in 1965. He will discuss fishing resorts, ranches, towns, and the narrow gauge railroad that now lie beneath the reservoir as remembered by local residents.

David has recently released his book, “Beneath Blue Mesa: The Gunnison River Valley Before the Reservoir” and there will be opportunities to check out his book, or purchase it and have it signed.

In the late 1950s, the United States Bureau of Reclamation was authorized to construct the Curecanti Project, consisting of three dams on the Gunnison River. The largest, Blue Mesa Reservoir, was created by the construction of a 390-foot dam at the start of the Black Canyon, inundating 23 miles of the Gunnison River Valley in the 1960s.

This is the story of the loss of three towns, sixteen fishing resorts, and fifteen ranches along the scenic Gunnison River west of Gunnison, Colorado. Local historian David M. Primus has spent over twenty years researching what was once beneath Blue Mesa Reservoir. He has interviewed dozens of people who grew up in the valley and have generously shared their photographs and stories. It is to the many people who were displayed by the reservoir this book is dedicated.

This book includes over 200 photographs and many stories of life in the valley before the reservoir. It can be used as a tour, allowing the reader to stop at various points and imagine what was there before.

About the author, David Primus:

Growing up on the Front Range of Colorado in the 1960s, David’s family spent summer
weekends west of Denver. Walking along the Colorado Central railroad grade between
Georgetown and Silver Plume, his grandfather pointed out the large rock abutments of the long-
gone high bridge on the Georgetown Loop. Thus began a fascination for “what was there
before.”

David moved to the Gunnison Country to attend Western State College (now Western
Colorado University) in 1978. After graduating and beginning a career in technology, his
avocation was focused on researching the history of the Gunnison Country. He has presented
historical slide shows, conducted tours, and helped produce a GIS (Geographic Information
System) database and map of historic sites in the Gunnison Country.

Based on his grandfather&#39;s stories of growing up in Steamboat Springs in the early 1900s,
David researched and wrote the book, Steamboat Springs: Memories of a Young Colorado
Pioneer. He was a member of a team contracted to research, write, and publish the book
Medicine in the Mountains: The Remarkable Storied History of Health Care in Lake City for the
LCMC Endowment Fund, Inc.

David has served as a long-time member of the Gunnison Historic Preservation Commission
and as a board member of the Denver, South Park, and Pacific Railroad Historical Society.